As we all know that Mainframe technology is already a 50 + year Legacy giant now and if one studies its trajectory through the ages, it is a crystal clear statement that this technology has conquered and still deepening its strong footprints in this advanced technology space. The following facts would clearly tell us why Mainframe held its dominance in the past and would continue the stint in the future,

With those superpowers combined, Mainframe becomes the most dominant and reliable server for most of the Business critical industries. Also the recent study confirms the above fact that almost 600 firms ranging from big to small are firmly reinforcing the usage of this Legacy giant. Since last five decades, business critical data of all the major industries like banking, airlines, government, insurance, etc., resides on the superpower Mainframe System.

Over the years, there has been a visible market shift where the businesses are expecting something extra from Mainframes. Based on a formal survey conducted by Vanson Bourne who sampled 520 mainframe clients:

– 62% of the existing clients want Mainframe not only as a backend server but also wanted it to be easily portable with latest and advanced technologies like Cloud, Mobile Apps, etc.

Therefore, it is safe to say that in spite of the above superpowers still there exists a gap in the Mainframe market WRT the business demand which is currently untapped. Based on the below recent technology trend research, percentage of mobile users has been increasing drastically which in turn surpassing the desktop users. It is also very evident that the end user wants their data on the go, this indeed reflects the human dependency towards the mobility world. Starting from banking to ordering food online, Mobile Apps are ruling every sphere which becomes inevitable and therefore, it is safe to quote the current era as the Mobile App era. 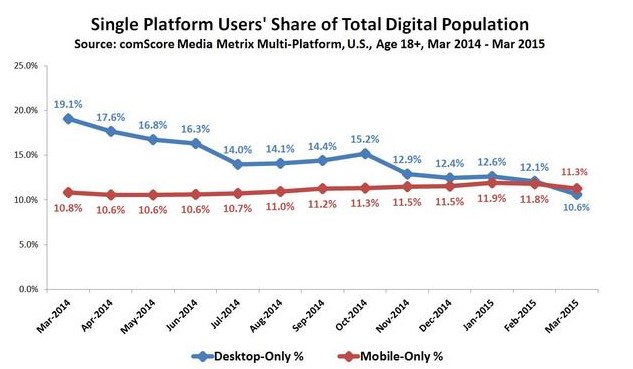 Because of this fast Mobility world, there is a drastic change in customer behavior, data access and the most important is the data traffic. Also in this Mobile App era, there is an exponential growth in the data, say their bank account access via smartphone is nearly ten times compared to the access through desktop. Moreover, the data is easily available 24*7, the concept of “peak traffic hours” is fading hence the user is now becoming impatient. They want the information as fast as they can demand it, and this leads to a higher probability of a negative response amplification.

Taking the above driving points of Mobility and combining that with Mainframe superpowers, IBM is investing a lot to maintain its Mainframe supremacy and also making it more user-friendly to aid the integration with latest and most sophisticated technologies like Cloud, Mobile App, etc. Coming to the case in point, here we will explore some of the options which aid the above said integration,

Citi Bank has already declared that it would be leveraging the z13 OS for app development!

It has five major packages which aid in end-to-end development and deployment of a mobile app on Mainframes:

Hence with above possible options, the developers gets an opportunity to strategize the Apps via consulting services, involve in real-time analytical insights to enhance the productivity, perform their day to day operations on highly coupled Z/Os free security services. Additionally, it helps in a seamless deployment of an App on various platforms with backward compatibility and integration with the older versions of the application.

You might argue on the cost effectiveness of this suite. In Feb 2015, IBM commissioned Forrester Consulting to conduct a Total Economic Impact™ (TEI) study and inspect the potential return on investment (ROI) enterprises may gather by leveraging the MobileFirst Platform.

The following figure is the 5-year estimate:

So, in a nutshell, the MobileFirst platform proves to be future competent platform by offering a faster time-to-value, reducing the integration efforts, lowering the application maintenance and upgrade cost plus providing enhanced security and analytics services.

Therefore, to sum up, the acquisition cost might be higher, but the retention cost of the mainframe is much lower than the other technologies and plus it provides a lot of other benefits like higher scalability, greater reliability, quicker processing and robust security.

In today’s competitive world, end customer satisfaction is the most important deciding factor for any business existence and it is being driven by major factors like huge data handling capability, high speed data processing, 100% system reliability and most important secured environment. Taking all that into our account, I will strongly emphasize on the fact that there is no better technology than the Mainframe system to support this app development space.